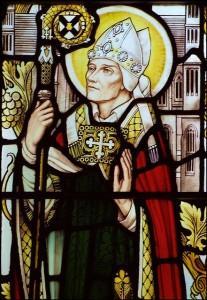 The Patron Saint of our school is St. John Fisher.  He was born in Yorkshire in 1469.  He was such a brilliant student that he studied at Cambridge University when he was only 14. He gained a Double University degree before training for the priesthood.

In 1502, he became the special spiritual adviser to the mother of Henry VIII, Lady Margaret Beaumont.  Together they founded two colleges at Cambridge University.  They also worked to provide money for students and to improve the teaching at both Oxford and Cambridge Universities.

In 1504, he was appointed Bishop of Rochester.  He wrote about many spiritual matters and his sermons were famous throughout Europe.  He defended the traditional Catholic Doctrines and was renowned and repeated for his holiness.

John Fisher was outspoken in his criticism and condemnation of the King’s behaviour.  He was eventually sent to the Tower of London in 1534, where he joined Saint Thomas More. This did not deter him and he continued to write about religious matters.  Pope Paul III made him a Cardinal before he was convicted of high treason and sentenced to death in June 1535.

We acknowledge his courage and commitment to his faith.  St John Fisher did not give up his beliefs, even when he faced death.  We pray that we may follow St John Fisher’s example and always try to be strong in our Faith.